Lately, fresh cut garden roses have appeared in flower magazines and floral news. This luscious rose had almost disappeared from the world, but thanks to English born David Austin we can now enjoy it's beauty.

Off course, in the world of gardening everyone knows what is a David Austin garden rose. When it comes to the fresh cut flower business the only roses that have been mass produced are modern hybrid teas. Hybrid tea roses have a different look of the roses of the past.

That look found in the Renoir Painting on the left. But now, thanks to David Austin hybridizing teas with floribundas, that "Old Look" was achieved. 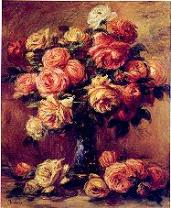 Unknown to many floral designers and the public, fresh cut garden roses are now available (in small quantity) to the American Market. Every day the fresh cut "World famous David Austin roses" are grown or flown into Miami airport.

Garden roses are fantastic for weddings.

Be warned! These roses might inebriate the receiver and we cannot be held responsible for the romantic consequences which will follow.

Yes, they are one of the most expensive fresh cut roses in the market, but their glamorous look and fragrance makes it worth a try. You don't have to be a millionaire or a King to purchase them, just a "Romantic". 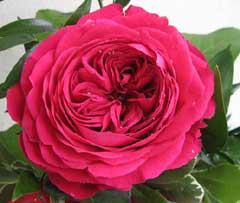 David Austin's garden roses are cut at a slightly later stage than ordinary roses, allowing them to ripen for longer on the plant. Delivered as large, slightly open buds, the roses continue to open over several days to reveal their beautiful, full, cupped and rosette forms.

Each rose has a unique character and opens in a slightly different way.

The roses gradually opens to reveal all the many petals hidden within the bud. The rose continues to open out fully until a cluster of golden stamens can be seen in the heart of the rose.

David Austin's garden roses have thicker outer petals, which are known as 'guard petals'. It is rare to see these in cut roses as they are often stripped away. These outer petals play an important role as they help to protect the many delicately-furled inner petals. They will gradually turn back and become hidden as the flower opens to reveal its old rose shape.

If, as you are admiring your roses, you notice that any of the guard petals is damaged, simply grasp it firmly at the base and remove it. There are so many petals in a David Austin rose that a few would never be missed. This extra care is optional, but will help to keep your flowers looking fresh for longer, particularly as the outer petals, being the oldest, tend to age first.

David Austin's "old garden roses" are very different - not only from ordinary roses, but also different from each other. Each variety has its own distinctive character and charm. This can be seen even in the finest details, including the character of the outer guard petals. The streaked, green coloration on the guard petals of Miranda is a beautiful, natural characteristic of the rose. The guard petals are highly distinctive - thicker, wavier, and often of slightly different sizes. The overall effect is very decorative, reminiscent of a parrot tulip.

Juliet has large, palest apricot guard petals that give an extra dimension to the rose, providing a beautiful contrast of color and form compared to the shorter, more brightly colored inner petals. These outer petals can be completely removed if required as the rose ages.

The guard petals of Darcey are similar to those of a modern rose. They will gradually turn back as the rose opens and rarely need to be removed.

Scented roses often have an abundance of very thin petals. Patience is a rose of this nature, with very many outer guard petals. As the guard petals of this rose are rather more delicate than average, they are more likely to become slightly creased on the edges during transit. Once the roses have arrived at their destination, we recommend that most of the outer guard petals are removed. This will help the rose to open fully, revealing a beautiful rosette shape. You may need to remove quite a few petals, but don't worry - the rose will look absolutely stunning once it has opened.

The guard petals of Phoebe have a beautiful gossamer character, creating an effect rather like a poppy. We suggest that the guard petals are left on throughout the life of the rose if possible.

Cymbeline has large guard petals which gradually pale in color as the bloom develops, becoming a very attractive shade of lilac on the reverse of the petals. These petals should be removed only if they become damaged.

Rosalind has large outer guard petals which protectively encircle the fat, globular buds. The guard petals may sometimes hold on to the bud and prevent the bloom from opening. Removing them will encourage the rose to open fully to reveal its glorious peony-like form. 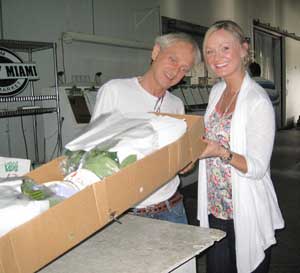 Wholesale garden roses inspection at the importer in Miami.

Many thousands of rose hybrids and cultivars have been bred and selected for garden use; most are double-flowered with many or all of the stamens having mutated into additional petals.

In the early 19th century the Empress Josephine of France patronized the development of rose breeding at her gardens at Malmaison. As long ago as 1840 a collection numbering over one thousand different cultivars, varieties and species was possible when a rosarium was planted by Loddiges nursery for Abney Park Cemetery, an early Victorian garden cemetery and arboretum in England.

Twentieth-century rose breeders generally emphasized size and color, producing large, attractive blooms with little or no scent. Many wild and "old-fashioned" roses, by contrast, have a strong sweet scent.

There is no single system of classification for garden roses. In general, however, roses are placed in one of three main groups: Wild, Old Garden, and Modern Garden roses. 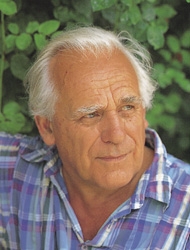 David Austin of Shropshire, England, rekindled interest in Old Garden Roses by hybridizing them with modern hybrid teas and floribundas.

Although not officially recognized as a separate class of roses by any established rose authority, English (aka David Austin) roses are often set aside as such by consumers and retailers alike.

Development started in the 1960s by David Austin of Shropshire, England, who wanted to rekindle interest in Old Garden Roses by hybridizing them with modern hybrid teas and floribundas. The idea was to create a new group of roses that featured blooms with old-fashioned shapes and fragrances, evocative of classic gallica, alba and "damask" roses, but with modern repeat-blooming characteristics and the larger modern color range as well.

Austin mostly succeeded in his mission; his tribe of "English" roses, now numbering hundreds of varieties, has been warmly embraced by the gardening public and are widely available to consumers. David Austin roses are still actively developed, with new varieties released regularly. 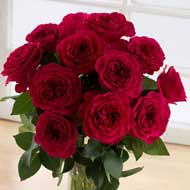 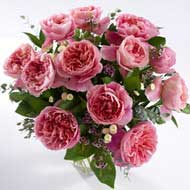 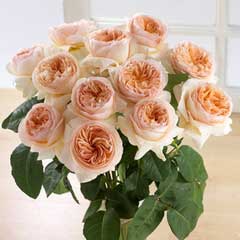 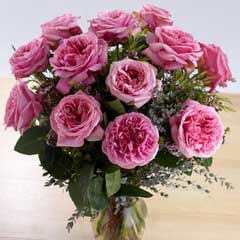